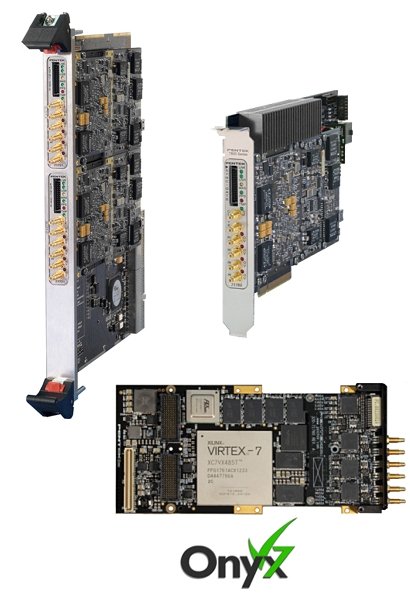 The Pentek Onyx (TM) family shares many of the same architectural and front-end characteristics as Pentek's Cobalt family of ADC products. The similarity of the two families gives developers the opportunity to port software developed for Cobalt modules to the corresponding Onyx modules with a minimum of effort. All ReadyFlow tools work with both families, further simplifying the software development effort. Thus, developers can migrate from Cobalt to Onyx modules as their performance needs increase, or begin development on Cobalt modules until the release of the corresponding Onyx module.

Architectural enhancements in the Onyx family include a doubling of the DDR3 memory in both size and speed to 4 GB and 1600 MHz, respectively. The PCIe interface has been upgraded to Gen 3, delivering peak speeds up to 8 GB/sec.

The modules feature high-speed ADC/DAC channels linked to an FPGA which comes preconfigured with a suite of built-in functions for data capture, synchronization, tagging and formatting, making the board an ideal turn-key interface for radar, communications or general data acquisition applications. For systems that require custom functions, IP can be developed using the Xilinx ISE Design Software and the Pentek GateFlow FPGA Design Kit, extending or even replacing the factory installed functions. The Onyx architecture now includes enhanced FPGA loading modes to simplify live reconfiguration.

The XMC (Model 717XX) card is used as the base module and is listed in the table below. PCIe, cPCI and AMC form factors are supported through the use of an appropriate Pentek carrier card.