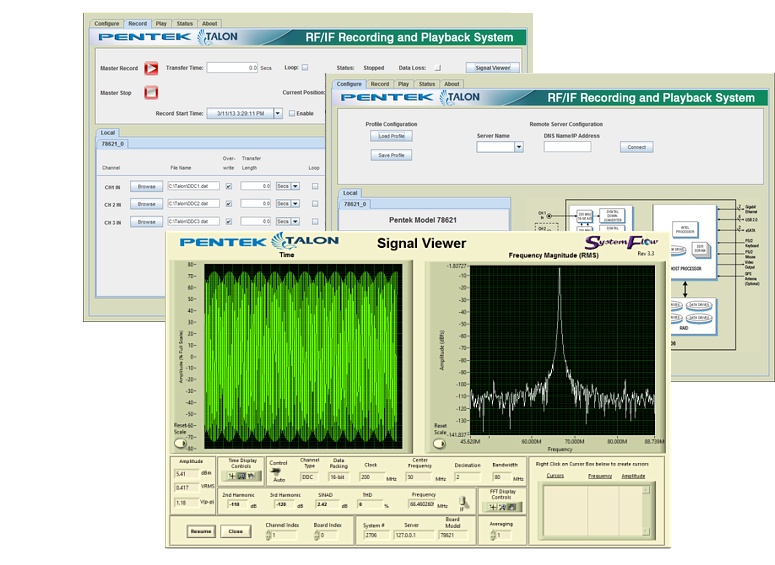 The SystemFlow GUI provides an instrument control interface allowing users to quickly setup and control the recorder hardware without having to write any control software. This jump starts development allowing the recorder system to be configured and data to be captured straightaway. When it is time to deploy the recorder and capture real-time mission data, developer's can use Pentek's SystemFlow API to develop their own automated control application (with local or remote operation).

Also included is an integrated signal viewer with virtual oscilloscope and spectrum analyzer display to allow for analysis of signals prior to, during and after recording. 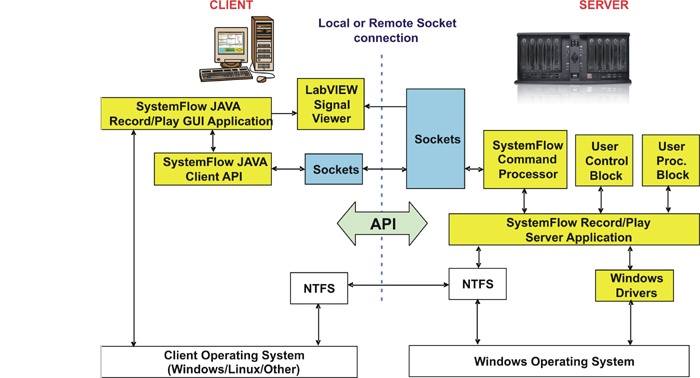 • Server/Client Architecture: The SystemFlow architecture provides for easy communication between the recording system Server and the Client.

• SystemFlow GUI: The SystemFlow architecture features a Windows-based GUI (Graphical User Interface) that provides a simple means to configure and control the system. Custom configurations can be stored as profiles and later loaded when needed, allowing the user to select preconfigured settings with a single click.

• SystemFlow Signal Viewer: SystemFlow also includes signal viewing and analysis tools that allow the user to monitor the signal prior to, during, and after a recording session. These tools include a virtual oscilloscope and a virtual spectrum analyzer.

• Server/Client Communication: Server and Client communicate through a standard socket connection. This arrangement enables the Server to provide real-time recording and playback functions that can be controlled from a local or a remote Client. It also allows Client and Server to run on different operating systems.

• Function Libraries: The function libraries and tools for controlling the recording and playback functions include the Application Programming Interface, the Graphical User Interface and the integrated Signal Viewer.

The Simulator uses the same client-server architecture as every Talon recording system, thereby allowing you to use either the SystemFlow GUI (Graphical User Interface) or SystemFlow API (Application Programming Interface) to control the system. In this way, the Simulator allows you to experience how the system operates exactly as you would experience using an actual system in the field.

The Server is responsible for the real-time data recording, while the Client provides the user interface, used to control and monitor the recorder. The Client is provided as a GUI (Graphical User Interface). The Client issues commands to the Server over a socket connection.